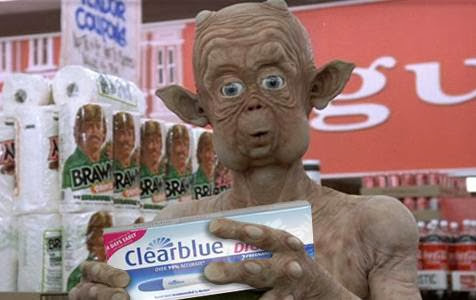 In an ongoing series of seriously bad films exclusively shown on VHS, Disasterpiece creator Heather Mack shamelessly gives you... Dizazzterpiece 9: Heather Mack Presents Mac and Cheese and me !!!
Mac and Me, the 1988 train wreck rip off of ET merged with relentless promotion of McDonald's and Coca Cola established new lows in the fields of acting and product placement.  Ms. Mack will be making mac and cheese for your snacking pleasure, and the usual refreshments will be served.
Kicking off on Thursday 10.10 at High Energy around 8:00, Disasterpiece IX  will have a more streamlined format to allow for an earlier end time.  Bring in your own favorite failed cinematic masterpiece, the next Disasterpiece Theatre will be put to a vote.  All Disasterpiece screenings are currently shown on VHS, so don't bring any hard drives, Zip disks, Blue Rays, DVDs, VCDs, Laserdiscs, Betamax cassettes, Capacitance Disks (betcha' didn't know about those), film reels, or whatever other shitty format you like, it's VHS or bust.  There is strong emphasis on films that have never been released on DVD, but as will all rules, this one is made to be broken.  See you there!
Posted by DiscoVision Vintage at 11:51 AM